I was so excited to embark on our ~500km/300mi journey through the Middle and High Atlas Mountains and the Ziz Valley to the Sahara Desert. The Dude (aka dad), not so much… Over the years, I have learned that he is much more into the destination rather than the journey, but will easily go along with the flow 😊. Moha, on the other hand, was eager to show us Erfoud and the Sahara, where he grew up and where his parents and most of his siblings still reside with their families.

Our first stop was in Ifrane, “Morocco’s Switzerland.” It is a VERY expensive ski-resort town. It is a very clean and quiet city, but I found it somewhat pretentious and rather soulless. Maybe because it is not hustling and bustling with skiers at this time of year… In any event, Ifrane became a rather quick stop – just long enough to walk around for a bit and stretch our legs. We spent a bit more time in Azrou, a tiny little town just outside of Ifrane, known for great trout fishing and the Barbary Macaque, an endangered species of ape that lives in the Middle Atlas Mountains. There was a group of ~15-20 of them playing in and around the forest of cedar trees along the side of the road. From there, I can’t recall the cities but will forever have the landscape etched in my memory. The diversity of scenery was UNREAL!! I still can’t believe my eyes and glad that I have photos as proof 😉. Out of the left car window were forested mountains and lakes in cool color shades of greens, blues, and greys, while out of the right car window were barren rock mountains and an occasional oasis in warm color shades of oranges, yellows, and browns. Both scenes had snow-capped mountains in the background. Unbelievably BEAUTIFUL! I so wish I had a different camera lens with me and more time… 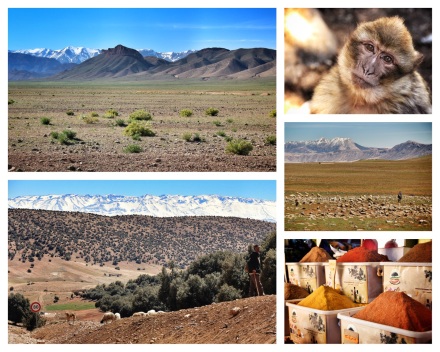 sights… NATURAL Beauty… A drive through the Middle and High Atlas Mountains in Morocco.

Nothing prepared me for what I was going to see and experience in the Sahara Desert. Although having lived in the Arizona desert for almost 15 years, and having spent time this past year in the deserts of Arizona, California, and Utah, I am very familiar w/ desert colors – or so I thought… I had not anticipated a full rainbow of colors in such bright hues. It was like a combination of Antelope Canyon, Grand Canyon, Death Valley, and Zion on steroids!

It was so INCREDIBLY peaceful watching the sunset from atop a very large sand dune. I can honestly say I have seen better sunsets… (3-January-2015 in Sequoia National Park was the best I have ever seen while 2-May-2012 in Negril, Jamaica and 5-May-2012 in Negril, Jamaica  were a close 2nd). I think it was the overall experience that made it such an AMAZING moment… Being in Morocco – a place that I had spoken about infrequently since my youth but never really had a plan to go… With my father – the only parent I have left… Celebrating his birthday – a big one, although he claims to be 39 and has since I was born 😁… In the Sahara Desert – a place that I imagined to be VERY tranquil but a place my sister really did not want me to visit because of its proximity to the dangers in Algeria – a mere 35km/20mi away – and the continued struggles in the Western Sahara Desert. Surprisingly, there was a stillness in the air. Even the camels ceased their moans, squeaks, groans, and roars and sat silently as the sun crept out of sight.

I so wish I could have spent many more days just exploring the Sahara Desert but I think the novelty of the desert with the Dude was quickly wearing off 😁. He loved the surprise birthday party that Moha planned but was ready to explore something different. Had I been with some of my more outdoorsy friends and had more time in Morocco, I would have asked Moha to arrange for us to stay deeper in the desert and for much longer. He has promised to arrange that when I return.

Much to my surprise, even the Dude, who is a city boy and not really into nature, said the Sahara Desert was WONDERFUL!! His favorite experience thus far. And that means a lot coming from him…

Where in the World???

The Stories Behind the Photos…